Posted by Amy on July 28, 2012
This week I have been to a local town called Rawtenstall (pronounced rotten-stall) and I must say that I have never really noticed how great it is as it has loads of charity shops, a market, 2 vintage boutiques - the vintage circus which is at the back of a cupcake shop and vintage cou cou (not been in this one yet), Sunday Best - which is a tad expensive but still nice and Bolthole which sells nice stationary, books and quirky stuff.
I always moan that I don't live in a place with good shops etc. but I think I have just not bothered looking for them.

However when I went this week I only bought one thing due my lack of money because I'm still saving for the Edinburgh Fringe Festival (just over 2 weeks now!!!) 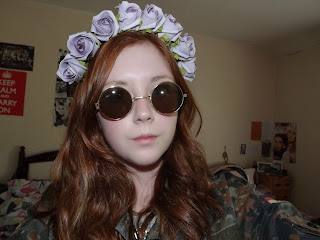 This morning I went to a car boot sale and found nothing apart from a camera which was old and really used and were selling it for £5 which was a bit much seeing as I only had £7 on me. I also went charity shopping and nothing there either. I need a proper shopping spree (20 days until I can!!!) and to go to Topshop.


Also how amazing was the Olympic opening ceremony? I wasn't going to watch it because I thought it would be rubbish but, Danny Boyle you so proved me wrong! I literally screamed at the TV when the Trainspotting clip came on because I totally forgot that he was the director. It was amazing!