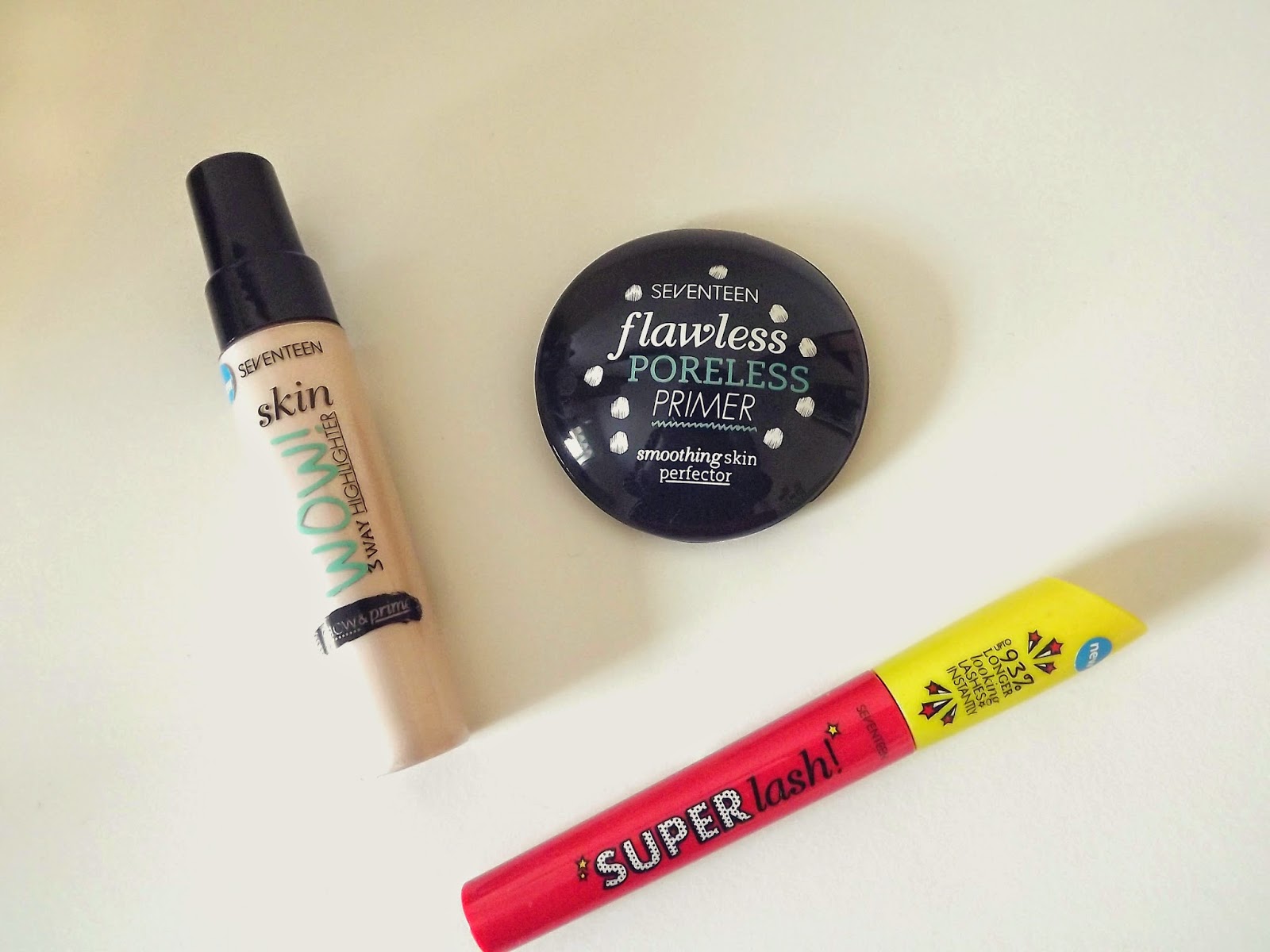 I have been in desperate need for some key make up staples recently so I took advantage of the 3 for 2 offer at Boots on their Seventeen products. I used to see Seventeen as just another brand of make up for young teens but it is actually really good quality. I picked up Flawless Poreless Primer, Super Lash mascara and the Wow! 3 way highlighter.

Flawless Poreless Primer (£5.99) - I always mean to use a primer but I tend to not have a lot of time to do my make up because I am so slow at getting ready in the morning but I am making an effort to incorporate a primer into my make up routine. I think this primer is supposed to have a similar effect to the Benefit Porefessional and even has a similar texture but the fact that it's more of a solid primer it's quite difficult to get enough out to cover your face. With the Benefit primer, a little bit goes a long way but I don't think the same applies with this product. However it does seem to reduce the appearance of pores and doesn't leave your skin feeling greasy so is a much cheaper alternative to the Benefit Porefessional.

Wow! 3 Way Highlighter (£5.99) -  The highlighter in my Sleek contour kit is slowly wearing away so I thought I would invest in a new highlighter and opted for this one after seeing it on Kate's blog. It can be used in 3 ways, hence the name, as a primer, to add definition to your foundation or simply as a highlighter. I don't really like the idea of smearing it all over my face as it is quite shiny so I tend to just use it as a basic highlighter. I really like this product and it is much better than the Sleek highlighter I used.

Super Lash Mascara (£6.99) -  I hold my hands up and admit that I may have bought this mainly due to the pretty packaging. You have to admit that it is pretty funky. I am pretty terrible at using mascara. I'm sure there is a correct way in which I am supposed to apply it and I am sure that I don't do it that way. This mascara really does enhance the appearance of my eyelashes but I do find it a little bit clumpy. However it may be due to my crappy applying skills because I know there are ways that you can avoid clumpiness so it's probably my own damned fault. I do really like this mascara and will continue to use it until it runs out and have to buy more which sucks because mascara buying is such a chore for me - they all just seem the same to me now.

Do you use any Seventeen products? Which are your favourites?